Motivate Yourself to Take Risks by Reframing Your Choices

How would you react to the following choices?

You are a public health scientist working for the CDC. A new strain of Ebola virus has invaded a major US city. The threat has been quarantined but experts are expecting the death of 6000 citizens. However, two solutions have been proposed to limit the damage. Which would you choose?

If you chose option A, you align with the preferences of 72% of people surveyed. But now, the CDC returns with a different plan. This time the following options are presented. Which would you select now?

Did you select option D? This represents the choice of 78% of people surveyed. But take a closer look and compare the choices in the first question to the second question. Do you notice anything interesting? Can you tell that they are the same?

What exactly is going on?

Options A and D are identical in this scenario. So are options B and D. The difference in the questions is that the former presents the choices in terms of lives saved and the latter in terms of lives lost. This scenario was adapted from the paper, “The Framings of Decisions and Psychological Choice,” written by the pioneers of behavioral economics, Amos Tversky and Daniel Kahneman.

Behavioral economics is a branch of economics that is combined with psychology to understand how real people actually make decisions. Economists and psychologists began noticing that people did not always make rational choices. In fact, they discovered that we often make emotional, irrational decisions. They realized that this created a flaw in the classic economic model that proposed that people were rational, independent, non-emotional agents. And in this landmark paper, Tversky and Kahneman brought our irrationality to light when they demonstrated that depending on how a question is proposed, subjects will choose opposite answers.

In the first scenario, people tended to be risk averse when faced with the question of how many lives to save. Most people chose option A, a guaranteed rescue of 200 patients. They did not want to gamble and potentially save everyone. What makes the question even more interesting is that both options A and B have effectively the same value at 200 people saved. (Option B’s value is calculated [1/3 x 600] + [2/3 x 0]).

In the second scenario, participants became risk takers. Most people chose option D. Rather than accept the option where 400 people are doomed to die, the subjects decided to gamble to cure everyone even though the odds were not in their favor. Once again, options C and D have the same effective value at 400 people lost (Option D’s value is calculated [1/3 x 0] + [2/3 x 600]).

So what accounts for this difference? Why did people change their answer?

Tversky and Kahneman identified the concept loss aversion to describe the phenomenon that might account for people’s decisions. Loss aversion refers to the our tendency to prefer not to lose something of a certain value than to gain something of the same value. Basically, it hurts more to lose $5 than to gain $5.

The following loss aversion curve reflects this fact. The loss curve is much steeper than the gains curve. So for the same value, the loss creates a greater than impact than the gain. 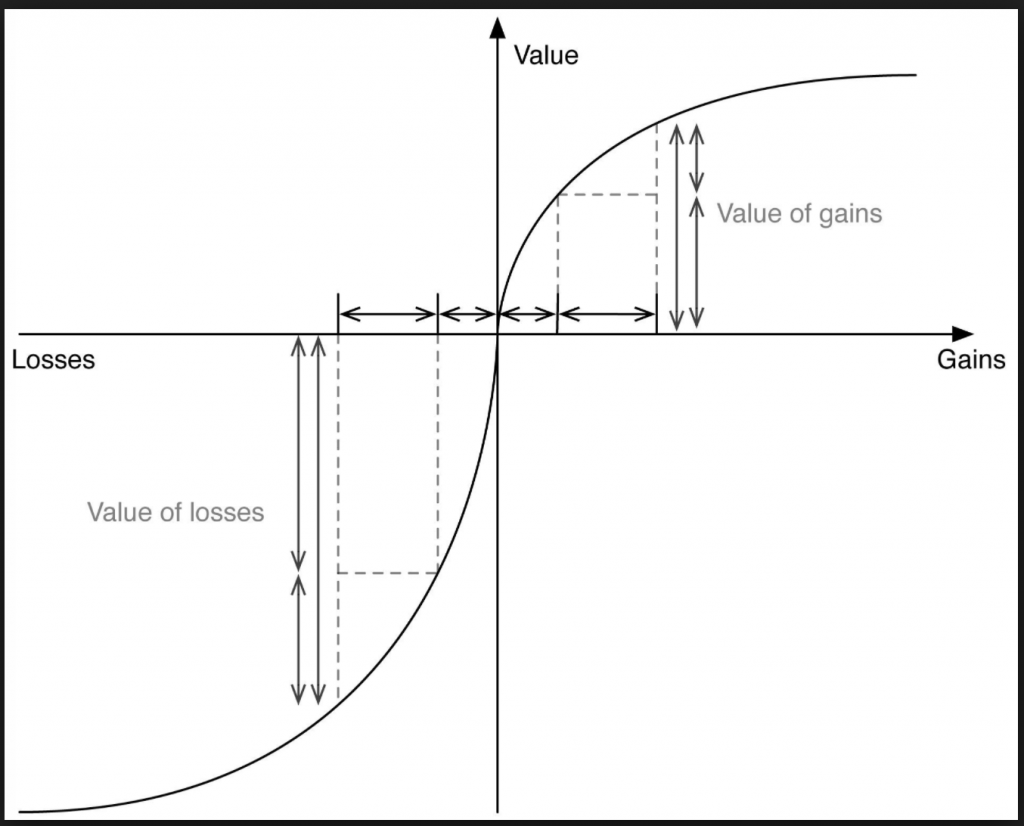 So when we are faced with the potential of losing something, we are more likely to take risks. Additionally, we would rather accept a certain reward rather than gamble for a greater gain.

How can we frame our choices to make better decisions?

2) Loss aversion indicates that we feel the hurt of losses more than the pleasure of gains.

3) We will take a small, easy gain but will take greater risks when faced with a loss.

In our day to day lives, we do not often place ourselves in situations of risk. It is easier to sit on the couch and enjoy the easy pleasure from a bowl of ice cream than to go to the gym and risk the chance that you may or may not have a six pack one day. Or you can sip and enjoy that beer at your next networking event and just stare at the CEO of the company you want to work at from across the room rather than risking rejection and talking to her.

Or you can use these takeaways to play a psychological game with yourself. Rather than reward yourself for good behavior, what if you penalized yourself for bad behavior instead? Before you enter a situation where your emotional self might override your rational self, make a deal with a friend to keep you accountable. Give them $25 dollars to hold as collateral. For every day of the week you exercise or one person you talk to at the networking event, he returns $5. Workout five times in a week or speak or get 5 business cards, you make your money back. Fall short and your friend keeps the difference.

The stakes are different now, aren’t they?

This technique might even improve your dating prospects. Give your wingman $25 dollars and head out to the bars to meet people. Challenge yourself to take risks and approach. You might just run into the love of your life.